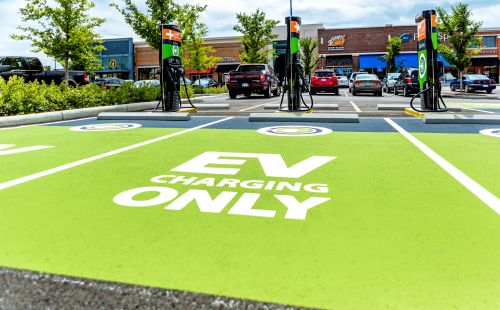 Published on September 29th, 2020 | by greentechheadlines

After raising $660 million from private investors, electric vehicle charging company ChargePoint is taking a crack at going public through the same method that a half-dozen EV makers have taken so far this year: a reverse merger with a special purpose acquisition company, or SPAC.

But unlike some of the EV makers taking the SPAC route so far — some without revenue and with questionable pathways to meet outsized growth projections — ChargePoint is promising to expand existing revenue at a steady pace toward profitability by maintaining its leading position in EV charging stations and networking software to meet the burgeoning needs of the global electric transportation market.

Switchback is one of a growing number of SPACs, sometimes dubbed “blank-check companies,” formed with the express purpose of taking private companies public without the lengthy roadshows, public disclosures and extensive private investor underwriting involved with a traditional IPO.

The deal will combine Switchback’s approximately $317 million in cash held in trust with $225 million raised via a private investment in public equity offering at $10 per share, to be led by institutional investors including Baillie Gifford and funds managed by Neuberger Berman Alternatives Advisors. After transaction costs and paying down debt, the transaction is expected to yield about $493 million to fund ChargePoint’s commercial, fleet and residential businesses.

It has used that funding to build a leading position in U.S. and European EV charging markets, manufacturing charging stations and providing software and services to manage charging operations and transactions at public charging sites. It has about 4,000 businesses and organizations using its charging systems, including Target and Ikea, and has deployed more than 115,000 public and private charging systems in the United States and Europe to date.

In a Friday interview with CNBC, CEO Pasquale Romano highlighted these factors as differentiating ChargePoint from other clean-technology companies pursuing SPACs in recent months. That includes EV manufacturers whose track records before and after completing their public debuts have brought negative scrutiny to the practice.

SPAC deals are attractive options for companies seeking to capitalize on growth plans via the relatively strong performance of public markets amid a broader pandemic-driven economic downturn, Shayle Kann, managing director at utility-backed investment fund Energy Impact Partners, said in a Sept. 14 episode of The Interchange podcast. That includes at least 10 cleantech-related companies seeking to go public through SPAC deals this year, he noted.

But SPAC deals also bear the potential to be seen as an “escape hatch for companies that would have otherwise struggled,” he said. Prior to ChargePoint’s announcement, of the 10 companies Kann was tracking, only one, Velodyne Lidar, has “meaningful commercial revenue,” Kann said. But many are projecting mid-decade revenues in the billion-dollar range, he said.

“I don’t want to group them all together too closely,” he said. But by seeking public valuations at such enormous multiples to current revenue, “they’re pitching a story wherein this is a moment when they’re about to hit the market and take over the world.”

For example, electric- and fuel-cell-powered truck maker Nikola Motors merged with SPAC VectoIQ Acquisition in June and saw its share price soar to nearly $80, boosting its market capitalization higher than Ford Motor Co., despite the fact that it had no revenues and no expectations to earn any until 2021.

But a negative report published this month by short-selling firm Hindenburg Research accusing the company of lying about its technology has driven Nikola shares to less than $20 in recent trading and led to founder and executive chairman Trevor Milton stepping down last week.

And Fisker Automotive, which went bankrupt in 2013 after raising $1.2 billion from private investors and $192 million in federally guaranteed loans, is now seeking a $2.9 billion valuation through a SPAC deal with Spartan Energy Acquisition Corp., despite having no revenue and no plans to produce an EV until 2022.

It’s not clear how companies that have already raised hundreds of millions of dollars of private investment will fare against established competitors in their fields. In the battery space, Eos Energy Storage is planning a SPAC deal to raise $225 million in new equity to expand manufacturing of its zinc batteries, despite the lack of large-scale acceptance of its technology against dominant lithium-ion battery makers to date.

Competition in the EV charging market

Romano told CNBC that ChargePoint’s prospects differ significantly from those of EV manufacturers attempting to recreate the success of Tesla and compete against global automotive manufacturers. Instead, “as all the existing automakers and the new automakers begin to transition to electric vehicles, that all drives demand for us.”

Electric vehicles made up only 2.6 percent of global automotive and heavy-duty vehicle sales last year. But that share is set to grow to nearly 14 percent by 2030, according to Wood Mackenzie, driven by government transportation electrification mandates and by the increasing cost parity of EVs against internal combustion engine-powered vehicles. That will drive a roughly tenfold increase by 2030 in the roughly 3.3 million EV chargers across U.S., European and Asian markets, WoodMac predicts.

ChargePoint reported a 2019 loss of $133 million on revenue of $147 million. While its 2020 projected revenue are expected to fall slightly to $135 million due to the COVID-19 pandemic, it projects 60 percent compound annual revenue growth through the next seven years, to exceed $2 billion by 2027.

“We’ve had a 10-year track record of shipping products and supporting customers,” Romano said. “We don’t have the risks of a pre-revenue company.”

One key challenge for ChargePoint will be to maintain its position in managing the underlying software, networking and services it’s established as central to its business model. Most of ChargePoint’s current revenue comes from hardware sales, with recurring software and services revenue making up a relatively narrow slice. But over the next six years, it anticipates growing that recurring revenue to account for nearly half of the total.