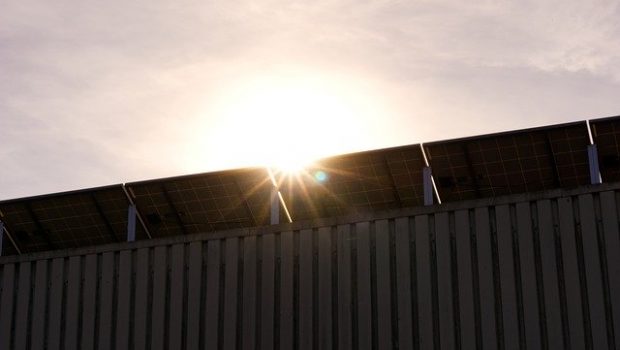 Published on September 7th, 2020 | by greentechheadlines

Appalachian solar effort a reality after backers powered through setbacks –

Appalachian solar effort a reality after backers powered through setbacks –

A new initiative announced Wednesday will install up to 12 megawatts of solar power in Virginia’s historic coalfield region over the next three years.

The nonprofit organizer’s vision of embedding solar energy training, jobs and renewable power in his native Appalachia is on the verge of happening after five-plus years of brainstorming, cajoling and striving.

Private and public partners involved in the ambitious undertaking plan to install up to 12 megawatts of solar power in the next three years while also creating 15 full-time jobs in solar installation, sales and marketing, entrepreneurship, and small business development.

“I’m feeling emotional,” said Wells, the regional director of community and economic development for Appalachian Voices, during a video press conference. “Right now, I’m kind of teleported to that conversation five years ago. Back then, I never thought we’d be making an announcement like this.”

In 2016, Wells spearheaded the Solar Workgroup of Southwest Virginia, the collaborative behind Securing Solar. He and other innovators had bandied about the idea of local renewable energy at a University of Virginia-Wise forum in 2015.

Wells, from Wise County, left that meeting intent on turning solar into an economic catalyst in a coal-rich region called up to power a country that now often regards it as an afterthought.

In addition to Wise County, the area includes Buchanan, Dickenson, Lee, Russell, Scott and Tazewell counties and the city of Norton. Norton, a community of 3,900, is in Wise County.

Despite a steep learning curve and plenty of early setbacks, Wells said he and his colleagues persevered because southwest Virginia deserves to partake of the fastest-growing energy source in the country.

Roughly 4,500 Virginians have solar-connected jobs and sweeping energy reforms passed by the General Assembly have the potential to boost that by another 30,000 over the next decade, according to industry figures.

The state mining agency reports that the coal industry employed 2,887 in Virginia in 2019.

The name of the workgroup’s initiative is a nod to Secure Futures, a solar developer west of Charlottesville in the Blue Ridge Mountains, that will be a linchpin in the partnership’s success.

Since its founding in 2004, the Staunton, Virginia-based company has developed more than 11 MW of solar arrays on schools, hospitals, governments and businesses. The bulk of its projects are in Virginia, but the company has also worked in Pennsylvania and is expanding into North Carolina.

Secure Futures CEO Tony Smith called his “plan of attack” in southwest Virginia a 5-5-10. That is, the partnership will construct 12 MW of solar arrays at five commercial buildings, five multifamily housing units and 10 schools across the seven counties by 2023.

He emphasized that the relatively rapid schedule will require cooperation from utilities as varied as Appalachian Power, an investor-owned utility that is part of American Electric Power; Powell Valley Electric Cooperative, a subsidiary of the Tennessee Valley Authority; and Old Dominion Power, a unit of Kentucky Utilities.

Smith is hopeful that new legislation such as this year’s Virginia Clean Economy Act and last year’s law that allowed electric co-ops to expand net metering will allow them to navigate the crucial funding mechanisms that allow customers to lower their electric bills and not have to make upfront investments in solar panels.

That becomes tricky, he said, because Old Dominion and Powell Valley are operated by out-of-state entities that might not have to follow Virginia law.

“We’d like to see them adhere to the energy policy of Virginia,” Smith said, adding that he would seek a collaborative solution before going through the General Assembly to tackle it legislatively. “We’re prepared to take on that challenge if it needs to be done. We love challenges.”

Another hurdle could well be configuring power purchase agreements and net metering arrangements for schools and municipal buildings in Appalachian Power territory because of an ongoing contract issue.

“We’re trying to bring a solar revolution into the coalfields region,” he concluded. “Without [utilities’] support and cooperation, it’s going to be a tough road. With their support, all things are possible.”

To broaden the scope of the partnership, Secure Futures will provide start-up funds to Lonesome Pine Solar, which has its headquarters in Big Stone Gap.

Glen “Skip” Skinner, the new president and manager of Lonesome Pine Solar, said he is eager to help community college students move from the academic world to jobs in a new regional industry.

Skinner served as Wise County administrator from 2004 to 2008. Since then, he has worked for several organizations focused on economic and community development in southwest Virginia.

The state Department of Mines, Minerals and Energy also has an active role with the solar workgroup. In May, the agency rolled out a solar technical assistance program designed to make solar development faster, easier and more affordable across Virginia.

Nick Polier, an agency marketing specialist, pointed out that one operating solar project is a 140-kilowatt rooftop array designed to power half of a building in Big Stone Gap shared by his agency and the community college.

Solar energy now provides just 1% of the state’s electricity, so Virginia will have to significantly boost production to meet a legislative mandate to decarbonize its electricity grid in the next 25 years.

Even though the workgroup participants presented the news about Securing Solar during a Zoom meeting on Wednesday, their relief felt palpable to listeners.

Going in, they knew their effort to deploy solar in a region that had prized now-faltering coal for a century was an incredibly heavy lift.

In January 2019, when Chelsea Barnes began her new job aside Wells as the new economy manager for Appalachian Voices, Virginia’s solar laws were still piecemeal, area utilities were not up to speed on integrating renewable energy and many residents were wary of a transition to renewables.

As well, no solar developers have yet set up shop in an area where the barriers were close to impenetrable.

“We are trying to do something that’s hard,” Barnes said in spring 2019 when the workgroup was seeking bidders with creative solutions to the original maze of challenges.

The Securing Solar initiative grew out of trial, error and frustration after the collaborative’s attempts to install more than 4 MW of solar across the mountainous region were stonewalled.

In spring 2019, the workgroup sought bids on 12 projects totaling 2.73 MW. That list of nonprofits, businesses and local government entities included a Baptist church in Gate City, a fitness center in Big Stone Gap, an apartment complex in Abingdon, a wastewater treatment facility in Pennington Gap, a hotel in St. Paul, and a hospital building and rescue squad building, both in Norton.

Before that, in November 2018, the workgroup had let a bid for six projects totaling 1.5 MW. That list included Ridgewood High School in Dickenson County and Central High School in Wise County. The other four, all in Wise County, included Norton Green Apartments, the Lonesome Pine Industrial Center, the University of Virginia-Wise Oxbow Center and the Wetlands Estonoa Learning Center.

While deflated, the workgroup refused to be defeated.

Last April, Wells and other participants tacked in a new direction. They invited any and all potential players to identify, design and develop cost-effective commercial-scale solar and battery storage projects.

The open-ended approach was a new attempt to overcome the barriers that developers who won prior bids encountered with pre-selected projects.

“We’ve experienced failure,” Wells said last spring. “This request for information is the continuation of an experiment.”

After sending out a reshaped bid in June, the workgroup selected the team headed by Secure Futures. It’s possible that some of the stymied projects from the 18 identified in the first two rounds might also be on the new team’s list, Barnes said.

Fittingly, Wells and his colleagues delivered the update on the first day of the annual Southwest Virginia Economic Forum, the same event that hatched the idea of a solar workgroup.

“I couldn’t be prouder of this effort,” Wells said, adding that it speaks volumes about the drive of all participants. “I’m so excited to see this come together.”

This was originally posted on Energy News Network and was republished with permission.

Elizabeth H. McGowan is a longtime energy and environment reporter who has worked for InsideClimate News, Energy Intelligence and Crain Communications. Her groundbreaking dispatches for InsideClimate News from Kalamazoo, Mich., “The Dilbit Disaster: Inside the Biggest Oil Spill You Never Heard Of” won a Pulitzer Prize for National Reporting in 2013.

View all posts by Elizabeth McGowan